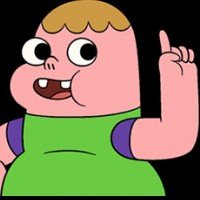 Every time I see his stupid face, I want to shove a harpoon up Clarence's stupid butt hole. Clarence is a loathsome abomination who is an insult to the mentally ill. And the mentally ill shouldn't be made fun of. - ModernSpongeBobSucks

I agree with you, they are horrible and it's a brother show of Uncle Grandpa. Cartoon Network really are running out of ideas.

If this kid existed, I would kill him and his friends!

I hope in the last episode Clarence dies!

I saw the previews, looks horrible

Clarence should be euthanized

DO YOU GUYS EVER SAY ANYTHING POSITIVE ABOUT THIS SHOW!?

Clarence, the retarded whore who just loves the attention of kids.