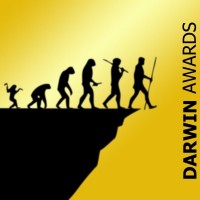 An award for someone who dies or is rendered sterile due to their stupidity thus improving the human gene pool. It has been noted by the British medical journal that 88.7% of winners are male. I must admit I don't really approve of it as stupid as the people might be this is pretty cruel. - Powell

When people die out of sheer stupidity it doesnt really bother me. To me its natures way of weeding out the ignorant and probably does help the gene pool. However I agree with Powell, giving an award for it is mess up and cruel. As stupid as they might of been they still probably had family and people who loved them. - THC13

by the way, great idea. Made to be an interesting and fun list. - THC13

Yeah, great idea of a list that was well worth a feature. - htoutlaws2012

The boy who ran away just because his phone was taken away from him. He ran off into the cold and died. He needs this award lol - SoongeBill

This is a very inhumane award rather than making a huge difference and establishing a true purpose for this atrocious award. - Kevinsidis